Definition of Classes at Regional and SV Shows

VP: Very Promising, the highest grading that can be awarded for dogs under 12 months.

SG: Very Good, the highest Grading that can be awarded for dogs under 24 months.

V: Excellent, the highest grade possible for dogs over 24 months but must have Breed Survey (UK) or Korung (Europe).

VA: Excellent Select, very difficult to achieve and only awarded at Sieger Shows.

At Sieger Shows only, the title or Sieger, Vice Sieger, Sigerine and Vice Siegerine is awarded.

Adult Male/Female: Over 24 months and must have Breed Survey.

Adult Long Coat Male/Female: Over 24 months and must have Breed Survey.

Working Male/Female: Over 24 months with BH AD IPO and Korung.

Challenge Certificates are on offer for most breeds. These are normally large shows lasting a few days. Your dog does not have to have done any previous winning to attend these shows.

Generally smaller than Championship Shows and open to all. Champions can be entered. Quite often dogs and bitches of one breed are judged together.

Challenge Certificate - This is a certificate which the judge signs stating that in his or her opinion the dog is worthy of becoming a Show Champion. These certificates are awarded by The Kennel Club. Your dog will need three of these awards, given by different judges, before he/she becomes a Champion. This status is also awarded by The Kennel Club. The judge has the right to withhold the CC (and RCC) if he does not think any dog entered in any class is worthy of being a Champion.

Reserve Challenge Certificate - All unbeaten winning dogs then challenge for this award. This certificate states that the dog given this award is worthy of being awarded the CC should the certificate winner be disqualified. This doesn’t happen very often! It is at the judge’s discretion to call into the ring the dog place second to the CC winner.

MP: Minor Puppy - For dogs of six and not exceeding nine calendar months of age on the first day of the show.

P: Puppy - For dogs of six and not exceeding twelve calendar months of age on the first day of the show.

J: Junior - For dogs of six months and not exceeding eighteen calendar months of age on the first day of the show.

Y: Yearling - For dogs of twelve months and not exceeding twendy-four calendar months of age on the first day of the show.

B: Beginner - For owner, handler or exhibit not having won a first prize at a Open or Championship Show.

M: Maiden - For dogs which have not won a Challenge Certificate or a First Prize at a Open or Championship Show. (Minor Puppy, Special Minor Puppy, Puppy and Special Puppy Classes excepted, whether restricted or not).

N: Novice - For dogs which have not won a Challenge Certificate or three or more First Prizes at Open or Championship Shows (Minor Puppy, Special Minor Puppy, Puppy and Special Puppy Classes excepted, whether restricted or not).

L: Limit - For dogs which have not become show Champions under the Kennel Club Regulations or under the rules of any governing body recognised by the Kennel Club or won 7 or more First Prizes in all at Championship Shows in Limit or Open Classes confined to the Breed, whether restricted or not at Shows where Challenge Certificates were offered for the breed.

O: Open - For all dogs of the breeds for which the class is provided and eligible for entry at the show.

V: Veteran - For dogs of not less than seven years of age on the first day of the show.

AVNS: Any Variety Not Separately Classified.

NFR: Not For Competition. 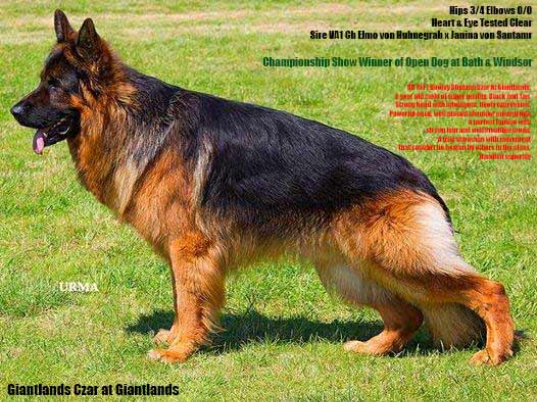 Auf der spitze – On the top.

Auslese – ELITE, pick of the best.

Etwas – Slightly, a little of.

Geschnitten – Cut off, cut away.